Open letter of the UIA staff to the President of Ukraine

Today, UIA and all the world's aviation are going through that ruthless period when pilots are on their knees. Unfortunately, NO measures to support the aviation industry in Ukraine have been implemented by the Ukrainian authorities to date. Ukraine International Airlines is preparing a project for the next release of employees, which will affect at least 140 pilots.

The state, represented by the relevant minister, directs all requests for support of the airline exclusively to shareholders. During the 28 years of UIA's activity, several shareholders and managers have changed, and even the State of Ukraine has owned the airline. At the same time, UIA is not a shareholder, it is not planes or even routes.

MAU IS PEOPLE! They are the intellectual potential not only of UIA, but also of the entire aviation industry of Ukraine. And it is they who, as a result of short-sighted actions of the state, today risk not only losing their profession, but also being behind the fence of a civilized economy. And Ukraine will continue to be a raw material country, because its inaction ruthlessly destroys its intellectual potential. The staff of Ukraine International Airlines, having lost all hope for dialogue with the executive authorities and the relevant ministry, openly addresses the President of Ukraine with a request to be heard and hope to preserve the intellectual potential of the aviation State of Ukraine!

Ukraine International Airlines is the largest air carrier in Ukraine and for more than 28 years has been developing aviation in our country. UIA is not just an airline, it is the flagship of the Ukrainian identity, which in its livery with honor carries the colors of the Ukrainian flag to all European as well as to many eastern capitals of the world.

For the years of Ukraine's independence, no other air carrier has been able to build a similar systemic network of schedules flights, instead of choosing a simpler way by developing charter flights, which are guaranteed by tour operators and seasonal demand for Ukrainian vacations.

At the same time, the aviation face of Germany is Lufthansa, France - Air France, the Netherlands - KLM, Poland - LOT, Great Britain - British Airways, Qatar - Qatar Airways, Turkey - Turkish Airlines and many other examples. Most of these national carriers are privately owned.

Despite this, the governments of North America, Europe and Asia have already provided $173 billion in airline support to rebuild the aviation industry, which consists of a repayable loan, a non-refundable wage subsidy, loan guarantees, deferrals and reduction of tax liabilities (link). This is reported by the International Air Transport Association, whose General Director Alexander de Juniac addressed the Ukrainian Government in a letter dated 20 March, 2020. Unfortunately, this letter, as well as many appeals from UIA, other Ukrainian air carriers, airports and specialized associations, remained unanswered, and the problems of the industry were left without any attention and even elementary dialogue.

We hear a lot from the Ukrainian Authorities about investments and the protection of foreign investments, but with their actions, or rather inaction, the Ukrainian Government is killing a domestic investor, who now urgently needs its support. So what example are we showing the civilized world? What signal do we send to external investors?

A few facts about the company the Ukrainian Government is neglecting:

It is worth remembering that on 8 January 2020, in Tehran, UIA plane was mercilessly shot down by military missiles. Among the 167 passengers on the plane, only two passengers were travelling from Tehran to Kyiv, the other 165 passengers were travelling with UIA through the “Boryspil” Airport hub to Toronto, Stockholm, London etc. This is a very sad but very clear example of exactly what UIA and the Boryspil International Airport State Enterprise joint contribution are making to the national gross of the domestic product of Ukraine, developing a hub in Kyiv - at the intersection of Europe and Asia.

Should we now focus on the fact that the Boryspil International Airport State Enterprise, just like us, has not received any support from its shareholder - the state?

The Iranian tragedy is not the only grief that befell UIA in this crisis year.

Now UIA and the entire aviation world are going through that merciless period when the pilots experiencing unprecedented times. Since the start of the pandemic, Ukraine International Airlines has been forced to lay off 1,000 valuable employees.

Ukraine International Airlines is preparing a project for the next layoff of employees, which will affect at least 140 pilots. In addition, due to the inability to undergo periodic simulator training for flight personnel (there are no flight simulators in Ukraine) and the lack of the required number of flights, most of the high-class flight personnel of the airline are under threat of losing their certification to fly. For Ukraine, this will mean not only the loss of highly qualified specialists, but also the international potential of the aviation state, we are conquering in the international arena.

The state, represented by the relevant minister, directs all airline requests exclusively to the company's shareholders. For 28 years several shareholders and managers have changed in UIA, the owner of the airline was even the State of Ukraine.

At the same time, UIA are not the shareholders, and not the airplanes or even the routes. UIA ARE THE PEOPLE! They are the intellectual property not only of UIA, but of the entire aviation industry of Ukraine. And it is they who, as a result of the short-sighted actions of the government, today risk not only to stay without their profession, but also to stay behind the fence of the civilized economy. And Ukraine will continue to remain a resource-based country, because by its inaction it mercilessly destroys its own intellectual potential and contributes to the development of foreign companies, and then the foreign economy.

The decision to suspend the activities of airlines was made not by shareholders, but by state institutions, and restrictions on air passenger traffic led to an almost complete stop of UIA's operations, which could not have been predicted by any business plan or airline in the world.

According to the forecast of the International Air Transport Association, the recovery of traffic volumes to the level of 2019 will occur gradually during 2021 - 2024. (https://www.iata.org/en/iata-repository/publications/economic-reports/airline-industry-conomic-performance---november-2020---report/). UIA plans to restore its own route network, starting from April 2021, planning to reach 64% of the 2019 volumes. At the same time, until the restoration of the route network, UIA requires support measures similar to those provided to most air carriers by the governments of their own countries.

Unfortunately, the Ukrainian Authorities to this day have not introduced any measures to support the aviation industry in Ukraine. Ukraine International Airlines, having lost hope for a dialogue with the executive authorities and the relevant ministry, are turning to you, Mr. President!

We are not asking for any preferences or non-market instruments. UIA, like other air carriers of Ukraine, require urgent measures for state support, which will allow them to survive until the opportunities for international air transportation will be restored.

Based on the above, in order to prevent further escalation of social tension and irreversible consequences, we ask you, Mr. President:

With respect and hope to be heard,

On behalf of the entire staff 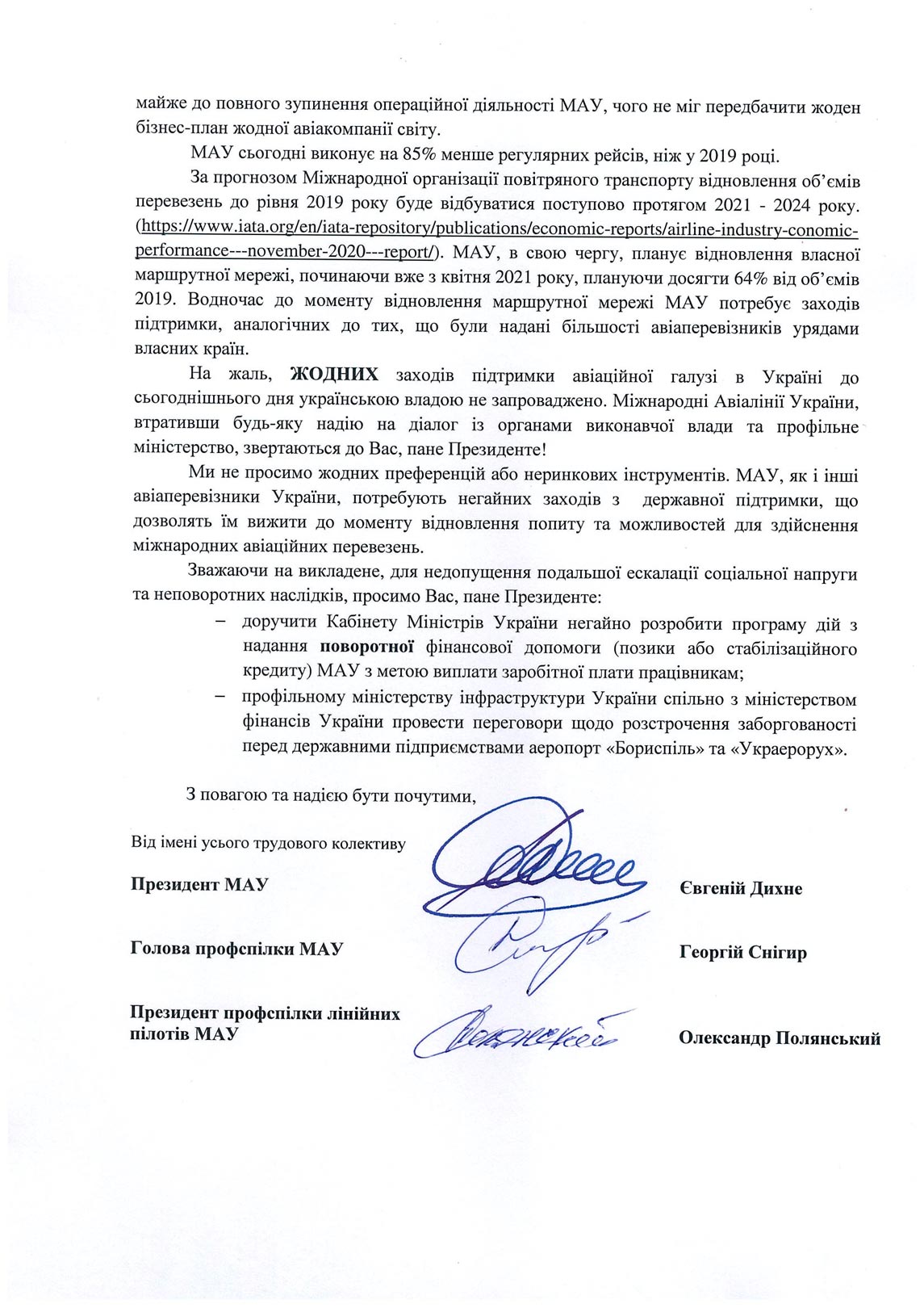